The History of Influencer Marketing (Part 1) 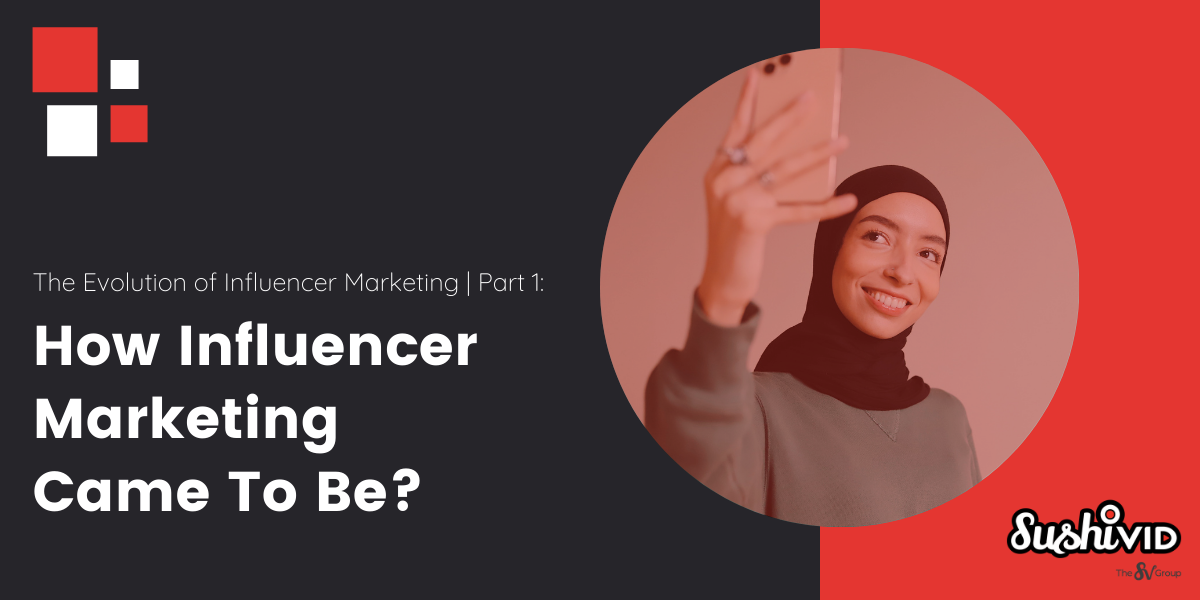 My mom used to host Tupperware parties at home. That was 40 years ago when she was still in her 30s. She would invite friends and colleagues over for a 'Tupperware Party'. After some small talk over snacks and drinks mom would whisk out and display all the latest Tupperware products and of course, reviews and pricing information. It usually starts off on the pretext of recipe sharing, a cookie baking session but as always, ends with the credulous ones buying a full set of Tupperware.

Influencer marketing to me is a Tupperware party brought online. Someone you “know” reviews and recommends a place, product, or service. You, as they rightfully call it, follow. Except for this time, instead of an intimate 15 homemakers, there are 100,000 of you who come to this party, like the item, engaged by commenting online and the next time you encounter the product, et voila! You are a convert! Imagine you are the Tupperware company today, wouldn’t you use influencer marketing to try to reach 100,000 people all at once? The scale of this compared to what it could’ve been 40 years ago… 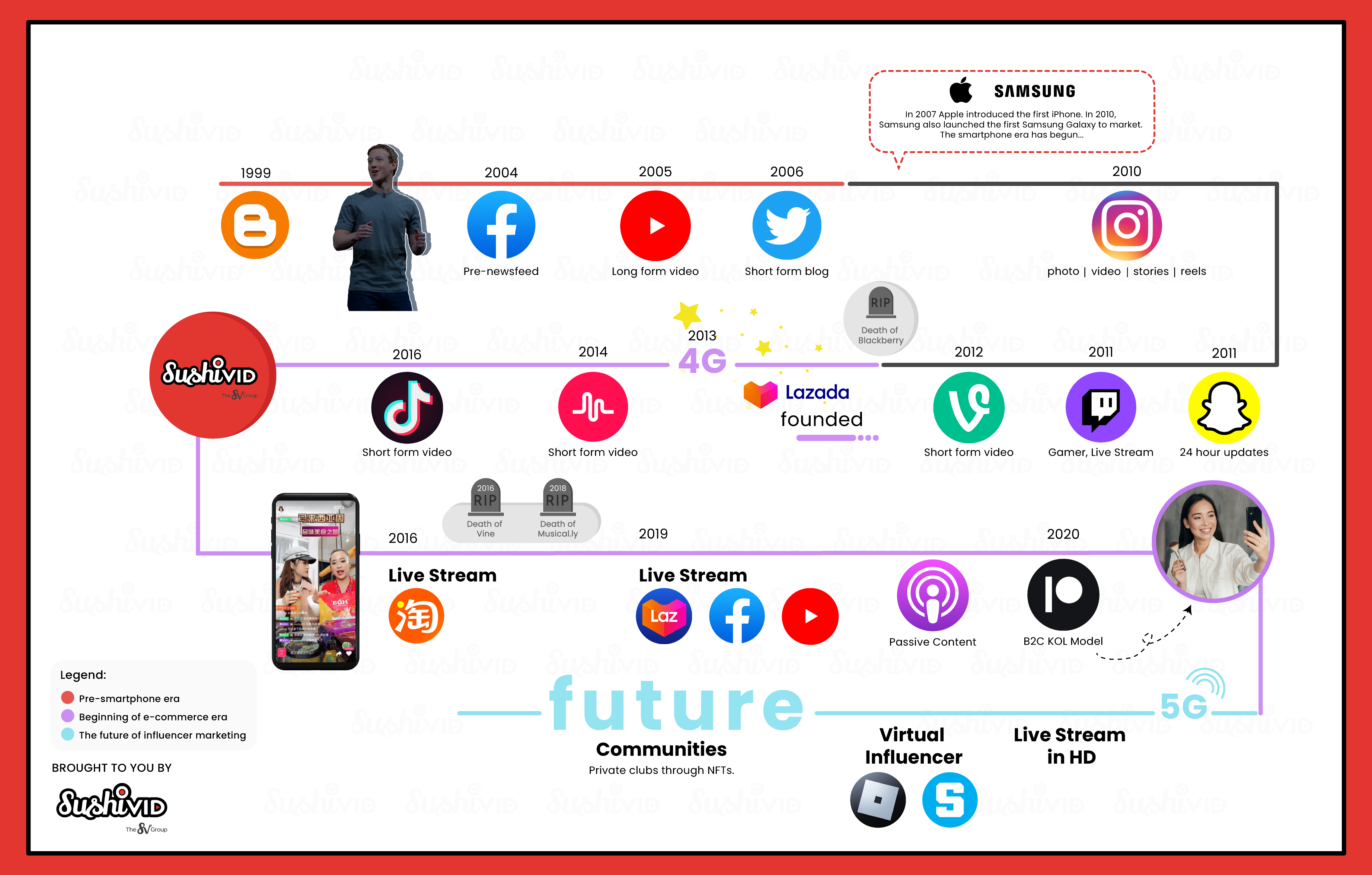 All these are made possible only through technology and platforms created by some brainy creative bunch whom we found interesting enough to follow. It all started with blogging. In the same era where we started sending e-cards through emails and chatting on IRC (If you remember those e-cards, you're a pre-1985 kid), there was also a more publicly available form of content called blogging. Blogging was great! People owned these subdomains (janedoe.blogspot.com) and shared their creative writings in them. We didn’t have smartphones with crazy high-definition cameras then. We also didn’t have computers that could edit videos as easily as they do today. Even if we did have good cameras and great rendering, most people didn’t have the internet speed to enjoy videos without lagging. In those simpler times, we enjoyed reading blogs. It was hard being a blogger. You had to own a few gadgets namely a digital camera. You had to be diligent in taking photos, writing, and uploading. Then repeat it weekly. Some of us enjoyed consuming content but we mostly found it challenging to create. One has to create new content continuously. Whosoever was willing to put in the time and hard work to consistently churn out great content won.

When Friendster came about, it was so different! We would add friends and write testimonials of each other. Friendster allowed us to upload photos and declare our “friendship” to one another. It was a cozy small circle of friends. I don't remember what happened to my Friendster account but it didn’t stick for very long. It got boring. I had a Friendster account circa 2002 - 2003 and by 2005 I was no longer active.

Right about then Facebook was built. It was fun, more addictive and it was exclusive to college kids. I was at the right place at the right time ie. in the US its birthplace was in 2006. It was fun then. We would go to frat parties and add people to our friend lists via email. You required a .edu email. It was the announcement board of every college about where the parties were, who-and-who is organizing the movie night, who attended which party, etc.

Mom wasn’t on Facebook and neither were my siblings. It got awkward when Facebook had family on it (roll eye big time). I guess Facebook was to me, what it must feel like for my niece to have me 'stalking' her Instagram or TikTok. A lot of us 90s kids stopped at Facebook. We didn’t evolve with the times. I’m guilty. I don’t have a Vine account, I’m not active on TikTok and I still don’t tweet. I tried but am not able to gain traction on Instagram. I guess there go my Influencer life dreams!

Twitter is a shorter version. I'd like to think of it as a fluff-free Facebook. People gave real-time updates of their whereabouts and how they feel. “This party sucks. Let’s go across the road for some tacos”. People liked the spontaneity of it. Instead of taking photos, uploading them to your computer, and then writing an article about it, you tweet right there and then! A blog except in real-time!

Up until 2007, it was still the Blackberry messenger era! We were still living in the texting world predominantly. It wasn’t until Apple launched their very first iPhone that we saw a shift in consumer behavior. Say what you will about Steve Jobs, his innovation was really a class of its own. Throw them iPods and cameras out! It's time to combine them all into one really smartphone. The iPhone! It was truly a pivotal moment for most of us because now we could snap away anytime and share it immediately! Things just got way more instantaneous!

I believe that while Instagram and YouTube were great for the few who owned the iPhone (or other great gadgets of that time, it was very exclusive to the affluent bunch), mass adoption, occurred around the world only when the Samsung smartphone was launched. That and 4G. 4G is like the sewer system. It is not acknowledged but we cannot function without it. The networks were crappy, uber-expensive, and lacking features but it was much needed. In hindsight, it feels like all the technological advancements needed to come together for social media to happen. Just as 4G came to life, Blackberries RIP around the world.

4G also aided in the adoption of e-commerce and all other sharing economy models. This in turn aided the adoption of influencer marketing at scale. Come to think of it, without the phones and the mass uploads of beautiful images, we wouldn't be as comfortable shopping online. Without the speed of the internet, we wouldn't have had the pleasure of endless scrolling.

Social media changes are fast and extremely drastic. Content consumption evolved from long-form videos (YouTube) to shorter and more instantaneous (Vine, Musical.ly, Snapchat). Consumers wanted faster content, just cut to the chase, everything I need to know in 6 seconds (This is how Vine works!) and they certainly didn’t want to save those memories forever, delete them in 24 hours (This is how Snapchat works!).

I never got into any of these short-form video platforms but my interns did and I learned a great deal from them. We all know the fate of Vine and Musical.ly but Snapchat is kinda sorta still alive. Europe is still huge on Snapchat and they probably will survive given the recent Meta threat to pull out from Europe entirely. Personally, I much prefer some diversity in the social media scene. Let’s make room for another player like Snapchat in Asia. I think Facebook has an overwhelming amount of control over my personal information and my time. From the conversations I've had to the videos I've consumed and the contents, I've shared. BUT ... for brands it's great! There are 2.9 billion Facebook users the last time I checked. We can't get more accurate than Facebook.

Amidst the buzz and frenzy, SushiVid Co. was born in October 2015*. From the time of our existence till today, 7 years, we've evolved so fast that I never had an opportunity to enjoy maturing in any social media platform. Just when YouTube died down, Instagram came up, and while Instagram was booming, TikTok came up, then Instagram launch a new feature Instagram Stories, the Instagram live stream feature started circa 2019, and in August 2020 Instagram launched Instagram Reels. Then YouTube somehow resurrected (at least in Malaysia) and Facebook rebirth as the up-and-coming virtual reality world - the Metaverse. Not a boring moment in Influencer marketing!

Optimistically, there will come a time we see influencers playing a bigger role than just endorsing products. For the last six years, we have had the opportunity to work with almost every type of business from cement companies to crypto trading platforms. People have asked if there is an influencer marketing fatigue. I'd say there will always be some kind of fatigue or another.  It is how we change with the times to stay relevant.

Continue to the second part of this article HERE!