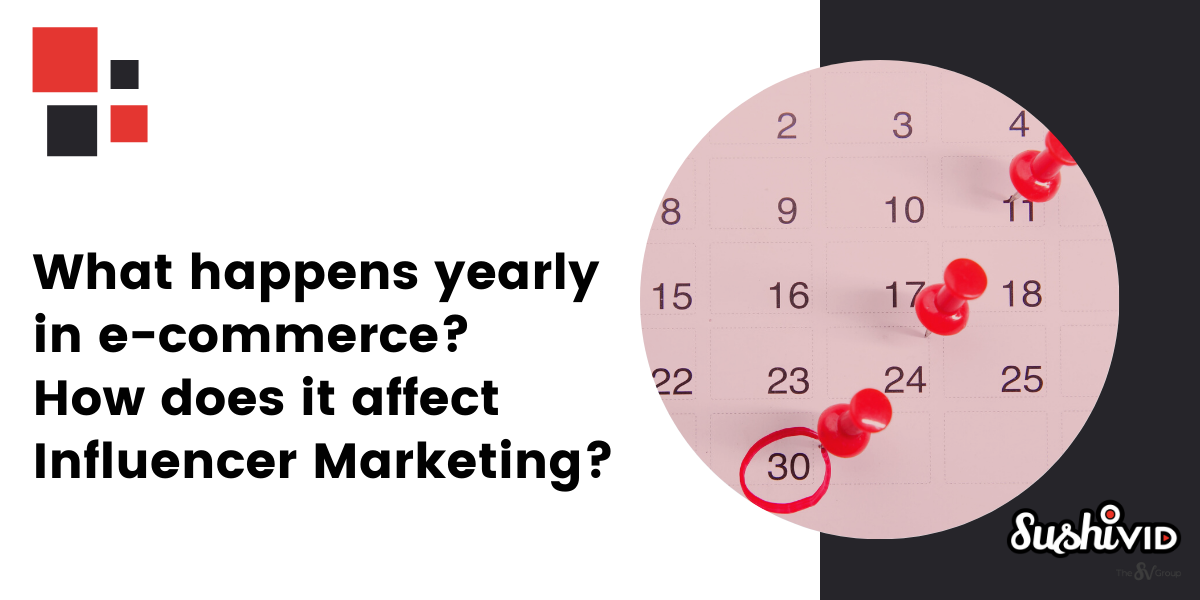 SushiVid has had the privilege to run some of the most awesome influencer marketing campaigns for e-commerce businesses in Malaysia and now if I look at it in hindsight, it all started with MYCYBERSALE 2015. I was still working for a Singapore startup then -  Minematic. We help send personalised emails to thousands of people on your mailing list. I was introduced to the CEO of iPay88, KL Chan from a tinder date I had from MasterCard and Mr.Chan subsequently introduced me to the e-commerce community and the rest is history.

The relationships I built from my last job were the low hanging fruits that made up a bulk of my customers the first 3 years at SushiVid. To be honest, if it hadn’t been for the e-commerce community support, we wouldn’t have survived till today.

The very first year I came back to Malaysia to start SushiVid, was also the same year I got more actively involved in the biggest and most vibrant community of entrepreneurs - The eCommerce Kaki. I think they carry different names sometimes (Malaysia E-Commerce Association, Internet Alliance…etc)  but over and over, the few people stood out in the crowd and they alone combine to make the most influential people in the e-commerce space.

At the same time, I was part of an accelerator program by MaGIC. My team just happened to have Hans-Peter Ressel, CEO of Lazada as our mentor. The definition of Hustle is when I remember volunteering to drive HP back from Cyberjaya to KL city in peak KL traffic jam and then driving myself home to Klang because I saw that opportunity to connect to be massive. It was a 4-hour drive. Some people think it’s luck, but I think it’s what you do with the opportunities that has been given to you. The things I would do, and I guess to a large extent would still do, to fight for what I want, I hope inspires my team and some of you to grow and keep on going!

Putting the two incidents together, I just got really fortunate and got a good headstart in the e-commerce space. A space that not many agencies understood then, and we had an easy entry. In the last 7 years, we did at least 3 years of Shopee’s campaigns, 5 years of Lazada’s campaigns, 3 years of MYCYBERSALE, and on and off campaigns for FashionValet, Shopback, Traveloka, YouBeli, JOCOM, Lelong and today, we work on international brands such as SHEIN, Pomelo Fashion, Taobao and are partners with Easystore, Click Asia, Lazada Live and more… 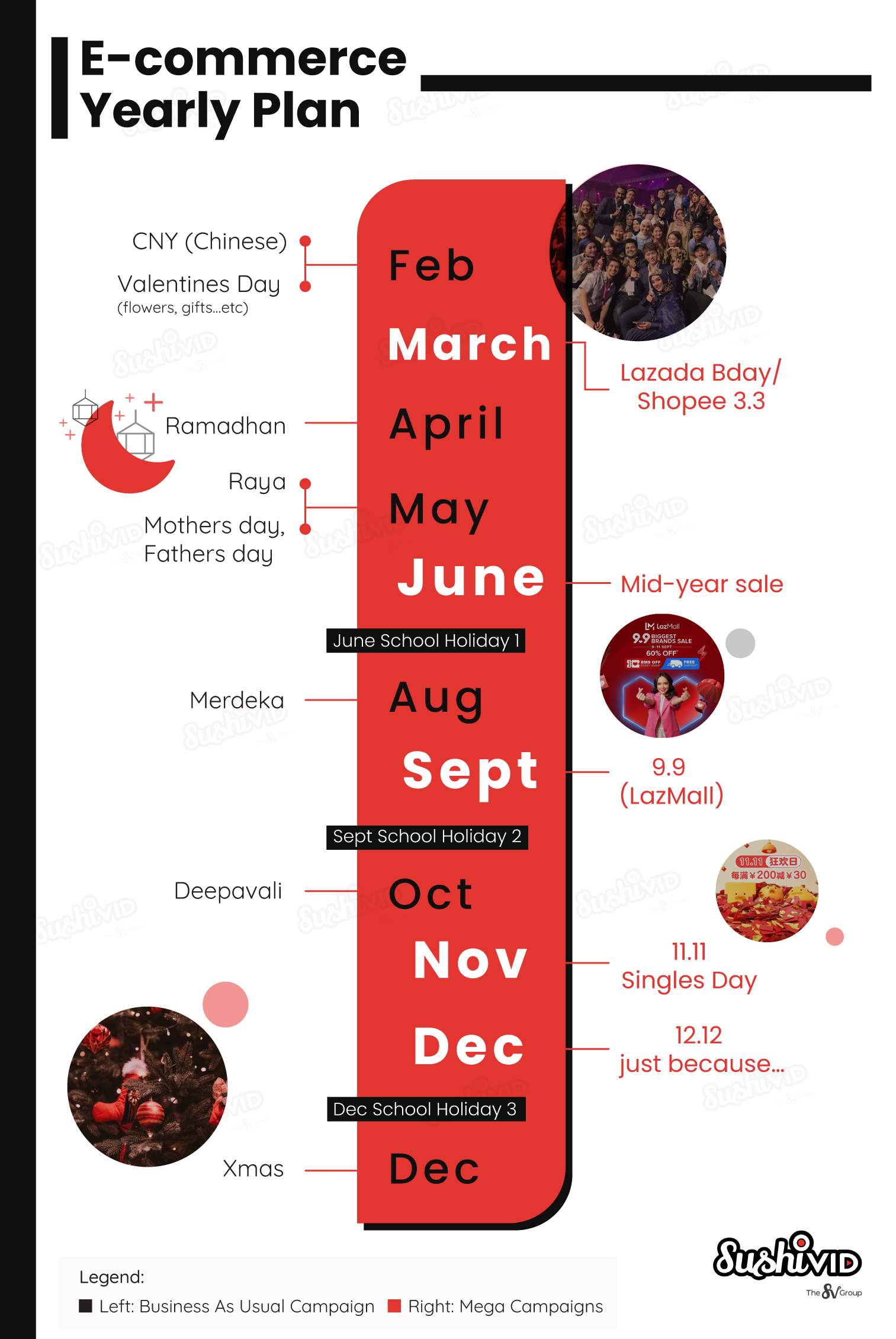 This is a general rundown of all the sales that happen in Malaysia on e-commerce. Of course, there are times when there would be a huge Baby Expo, or Furniture Expo or even a Matta Fair that would spark ideas in the marketing teams of our marketplaces to also sell those things, but the general yearly can’t go wrongs are in the image above.

To help you navigate, on the left side of this image are all the “Business-As-Usual” campaigns. I know I know they look like major holidays but in e-commerce terms, these are business as usual campaigns. The reason is simple, on Chinese New Year, we are all too busy eating and catching up and not actually scrolling online. The big festivities are usually the quietest times on e-commerce stores. However… This is not true for all businesses on e-commerce. If you’re selling flowers, gifts and cakes, Valentine’s Day, Mother’s Day, Father’s Day, Teacher’s Day should be your busiest days ever.

Amongst the business as usual campaigns, the biggest campaigns would be the Raya campaigns (Raya and Ramadhan), which obviously makes a lot of sense, our Malay neighbours and friends consist of over 50.1% of our general population, where as  22.6% are Chinese, 11.8% are indigenous Bumiputra groups other than the Malays, 6.7% are Indian, and other groups account for 0.7%. Non-citizens account for 8.2% of Malaysia’s resident population.

Christmas is also a big one, but I think it’s because of the combination of school holidays, year-end celebrations and for businesses, a chance to rid old stocks to make room for new that makes it a big one. December’s a mess online with the 12.12 sale as well all the others, so it’s generally a super busy month for all e-commerce businesses.

On the right side of the image are the Mega Campaigns. Campaigns where Black Pink would perform or Dua Lipa would fly to Jakarta for or Jackie Chan would do a ridiculous dance for a TV ad! Have you seen one of those? Cringe….

So why exactly are these campaigns huge?

Although there’s a sentimental value to these, for example Lazada Birthday is on 27th March - so that’s a huge campaign, and 9.9 is Shopee’s birthday so that’s another huge campaign but by and large, they all fall on the last month of the quarter. Suffice to say, at the end of every quarter, there is just another e-commerce major sale! They are themed somewhat differently, and you will see the differences in the next few paragraphs.

The only one that stands out in all the mega campaigns is 11.11 because it’s not on the final month. I guess when Alibaba bought Lazada, they wanted to bring the 11.11 culture to Malaysia and Southeast Asia but Shopee wouldn’t have it so they made 3.3, 4.4, 5.5, 6.6, 7.7, 8.8, 9.9, 12.12. It was really confusing the first few years, every month is a mega sale and they found out eventually that it was no longer effective! Now we’re settled somewhat, with 3.3, 9.9, 11.11 and 12.12 with the rest in between called other things like payday sale or “business-as-usual” campaigns. I sincerely hope they settle for even lesser mega campaigns because honestly, no consumer is keeping tabs and we don’t try to keep up with the sale because the next one is just a few months away! We call bluff too, there really isn’t a huge enough sale on e-commerce is there?

Kudos to the marketplaces though, they do try to vary it up a little. For example, 9.9 is LazMall sale. So if you have a LazMall (an official account - like the official Kiehl’s store or NARS store), then they will showcase these LazMalls during 9.9. But if you’re not one with a huge deep pocket to burn, my suggestion is to avoid the mega sales. You might wonder why?

Why is this important to you?

It is super red ocean during the mega campaigns. Pretty much every keyword will be expensive on google and Facebook will be swamped with ads that if you do create one during this time, your ad will drown out and you’re paying top dollars for that!

Most people will tell you to stock up on inventory during this period because pretty much everything will sell out. That’s NOT true. Most of my friends told me 9.9 was great last year because it was still the MCO period and when the MCO was lifted just before 11.11, the 11.11 sale was not great! So contrary to popular belief, it’s not that great! If you have been building a steady pool of audience who are waiting for your sale, you will see impact but if you’re a budding seller and your product SKUs are generic, don’t bother! As I mentioned, you will drown out in no time and any funds you have for targeting or any prime asset you wish to buy on Lazada or Shopee for the 5 minutes of fame will just be crazy expensive.

Of course if you’re a huge MNC, then go all out!

How does this relate to influencer marketing?

Influencer marketing is one of the major channels that these e-commerce marketplaces use to drive traffic to their website. Consider this, Lazada would fly 200 influencers to Jakarta to watch Dua Lipa concert and off-site activation, an additional 300 influencers to do branded content. The concert lasted for 3 hours but the whole show, hanging out with other influencer friends, short dances they could do while together, the entire social media is flooded with Lazada props and Lazada content for pretty much the entire 2 days!

Now, unless you have a superb way to hijack that, I would suggest creating your content outside these peak times.

Peak times such as these also mean influencers would create a few more content within the same day. That means a little less effort or attention would be given to your content and on top of that, a higher price because of the increased demand. Putting two and two together, I wouldn’t want to create a campaign at that time!

So what, you’re saying we do nothing?

No, absolutely not, here are some strategies of how you could still carve a little blue ocean for yourself!

Find the lesser demand platforms such as YouTube or use longer-form content such as Blogs. The reason why Instagram and Facebook are very high in demand for such sales is that they are shareable! That’s what social media is, after all, a photo-sharing, moment sharing place but products are often not explained clearly because of the nature of the content on Facebook and Instagram. So while the noise is there, is there necessarily a sale?

How many of you find that when 11.11 comes, you have no idea what to buy? I am just like that! I would need suggestions and I would love for someone to tell me what the Top 10 sales are! Et Voila! Create a Top 10 items to look out for during 11.11 and one of them is yours! This works even better if your product takes explanation, I would really take the time to write comparison, review content leading up to 11.11 so that users that are searching for info about a product like mine, will find this article or YouTube video and have the confidence to buy.

If your product is really simple and generic, fret not! There’s still hope for you after all! I would book influencer marketing REALLY early on. I would also be really smart about it and create content way ahead of the curve so that people would’ve added my item to cart already and when the e-commerce marketplaces add on some free shipping, watch your conversions grow! But hey, this only works if you’re really REALLY giving a good deal.

Finally, knowing what I know Lazada and Shopee would do, you could try to hijack their campaign and make a video that ties to their ad! Going back to the Jackie Chan ad, you could get your influencers to do something similar to that, or mimic Jackie Chan’s moves and change the ad to your own product instead of Shopee’s. This has to be timely though, there isn’t a huge window between the Jackie Chan video and the 11.11 sale but if you could pull it off, you could ride on the wave, at a fraction of the cost!